The Revolution Spurred by Art 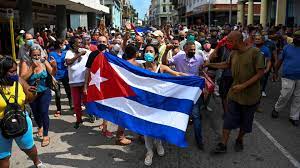 “Patria y Vida”, chanted the Cuban protestors melodically as they gathered in the streets last summer– a witty wordplay on the pro-government trademark that’s permeated their livelihoods for as long as they can remember.

In February 2021, Cuban musicians from all over the world united to release a powerful rap song, “Patria y Vida”, (Homeland and Life) littered with historical allusions and directly addressing the Cuban government.

“No more lies, my people ask for freedom, no more doctrines,

And begin to build what we dreamed of, what they destroyed with their hands,

Let the blood not continue to flow, for wanting to think differently…”

When the song reached Cuba, thousands were brought to their feet, swarming the streets in a struggle for freedom. With dwindling rations and frequent power outages intensified by the effects of the pandemic and accusingly poor leadership, Cubans became desperate for change. “I couldn’t believe it when I woke up on July 11th and I see that many friends of mine sent me the link saying look what happened in Cuba,” describes singer Yotuel Romero in an interview with CBS Miami, “I see thousands of people in the streets singing ‘Patria y Vida’, screaming ‘Patria y Vida’, and screaming ‘freedom, freedom, freedom’. I said wow.”

It’s no surprise artists are at the forefront of this political movement in Cuba–  but while the socio-political motivation behind Cuban art is widely recognized, art in the tropical country expresses far more than pro or anti-government ideologies. For generations of Cubans repressed by limited-expression laws, artists historically turned to dance to communicate their opinions. A nonverbal art form, dance such as ballet, modern dance, and traditional dance have been focused on for decades. Expressing ideas of social justice, challenging racial prejudice, gender norms, and censorship by moving their bodies in poetic ways.

By looking at the history of dance in Cuba, light can be shed upon the richness of the country’s challenges. Dance can be used to propose ideas of the national community and hope for a better future. “Art can be a great unifier for people who believe in a common cause, a symbol or artwork can help identify other people who support a movement,” explains National Art Honors Society student, Milla Bojdo, when asked how all art forms can spark a revolution.

The Cuban government persists to limit the freedom of its citizens, shutting down resistance promoted by artists. As documented on constituteproject.org, the Cuban constitution states that “…artistic creativity is free as long as its content is not contrary to the Revolution.” Artists– faceless or familiar– will continue to persevere despite the circumstances.