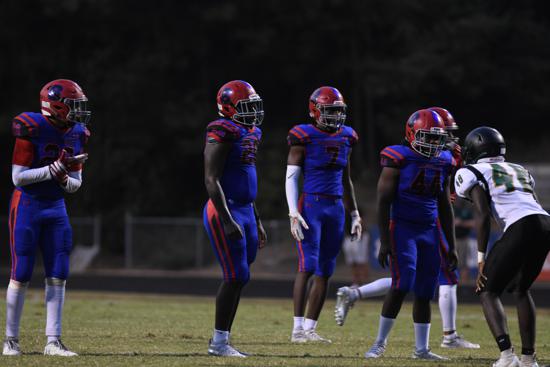 Sanderson wraps up the 2021 season.

Ending the second sports season with a magnificent victory, our spectacular Sanderson football players and coaches shared their expectations and worries about the upcoming fall season.

On April 8, the SHS football team finished its season with a 37-16 victory against Southeast Raleigh. The team had a chance to participate in the state playoffs after the end of the season, however they were not selected.

Freshman Hampton Jones shared that one of the things he was concerned about this season was wearing masks, which could keep players from getting enough oxygen during a game.  Jones added, “as well as having less games than normal, and having them on Saturday are not adequate for many.”

Brian Griffin, sophomore, shared that the only thing he is concerned about is everyone’s safety. He believes that having everyone follow the rules will have a great impact on everybody’s health, and the games. Brian also mentioned that he is very confident in his team, and is sure that no matter what, they will “Work hard, and attack greatness.”

Jeremy Buck, Head Football Coach shared, “We are very excited and look forward to the fall football season. We feel our program is stronger now than when we arrived.” Buck went on to discuss the loss of the program’s eleven seniors, “They all played a vital role in our success and building our culture. We do return a lot of guys who have experience in our program, though, and they are hungry to earn a shot in the playoffs”.

One of the concerns Nasir Jacobs, freshman quarterback mentioned about the new season is filling the shoes of senior quarterback Jackson Masterson, “After seeing what he did for the program for four years, that’s the least I can do for him and Sanderson as a whole.”

Freshman Ben Cashwell is expecting Sanderson to produce two very strong teams next year even though they are losing some key players on varsity, “We have extremely strong and smart coaches on both levels so I am excited to see what they do next year” Cashwell said. He then continued noting, “I expect a possible tournament run for varsity and a possibly undefeated JV team. Ultimately JV’s productiveness next year will depend on who is pulled up to varsity and what kind of freshman talent we see at tryouts.”

Defensive coordinator Ben Gage shared, “We are very excited about the upcoming Fall football season for a number of factors; a return to somewhat normalcy in our lives after the COVID-19 quarantine, this upcoming senior class is one we have been looking forward to for a while based upon their leadership, quality of play and overall character.” Gage continued, “ As far as expectations from a win-loss perspective, the expectation is always to win the state championship. Because I firmly believe if that is not your expectation, when do you plan on losing?”