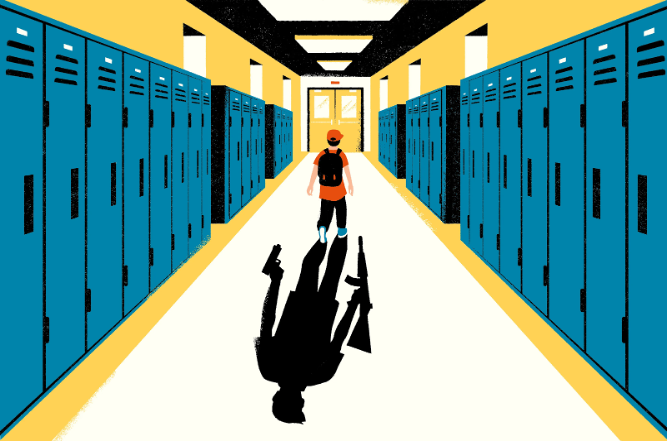 Students live in fear of gun violence in school

Schools have always been considered to be one of the safest places for children. They provide an environment where kind teachers help their students and where classmates are friendly with each other. But what if in a moment all of that could be ruined? What should the school do at that moment, when someone enters the school with a gun?

School shootings are, and always have been, a topic people try to avoid bringing up in conversation. This could be because they are afraid that such a situation might happen to them, or because they do not want to “provoke” anyone. However, discussing difficult topics like this might help people better understand the impact and possibly even help prevent school violence from happening.

Sanderson teachers and students shared their experience and their thoughts on this topic. Social Studies Teacher Claire Smith shared, “As teachers and students, we are both well aware of the possible threat of a school shooting. It’s unfortunately something that I have thought about a fair amount in my life as both a student and a teacher.” She continued,  “When I was trying to decide what I wanted to do as a career, the frequency of school shootings was quite high. I wondered if this was the kind of risk I was willing to take?  Obviously, I ended up deciding that I still wanted to be a social studies teacher and hoped that nothing horrible ever happened at my school.”

Smith also mentioned that she often finds herself pre-planning an escape plan, or where to hide if a threat were to present itself. She recognizes the responsibility she has as a teacher to protect her students. Smith stated, “As a teacher and civically engaged citizen, I try to advocate for policies outside of my classroom that I feel would help prevent such a tragedy from occurring. We need to figure out how to stop these events from taking place and ensure that school is a safe place for students to learn and spend their days.”

Sanderson has multiple protocols in place to prepare teachers and students in case such a catastrophe happens. Junior Spartan Adrian Zalamea shared his thoughts about these school shooting procedures saying, “ We were told by the school  not to make any noise if the shooter comes, and to also turn the lights off, and stay together.”

Sanderson English Teacher, Whitney Chapman, shared her experience of being a student around the time when the very first school shooting occurred at Columbine High School, “School changed immediately for me as a teenager. On the morning following the shooting, all the students at my school entered the building through one entrance and immediately walked through metal detectors, with police officers searching all of our belongings.” Chapman continued, “This security measure lasted through the end of the school year. I remember watching the incomprehensible footage on the news, watching the young men roam the building and cafeteria looking for their victims. It was scary.” Chapman also stresses the importance of students following the procedures put into place by the school to ensure that everyone stays safe.

Our future is in our hands, and making it as safe as possible is our responsibility. Understanding this kind of situation and getting it under control, will help us to make the right decisions. Be aware of the danger; Peoples’ lives are at stake.