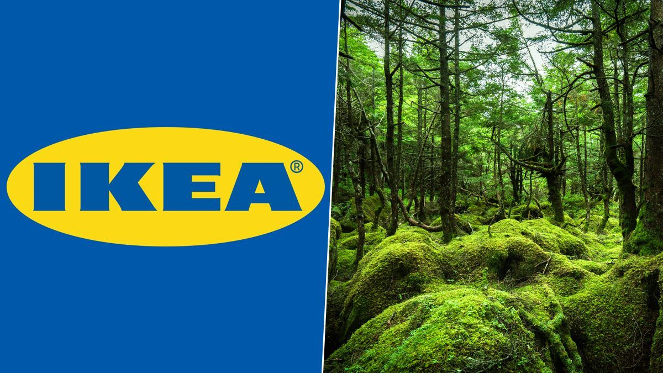 Retail giant, IKEA made a purchase of 11,000 acres of land in southeast Georgia to preserve it from development. This decision will be a big step forward in protecting the 350 plant and wildlife species that inhabit the region.

Conservationists have criticized IKEA in the past for its staggering lumber consumption and its encouragement of fast-fashion-like operations in the furniture industry. However, within the last couple of years, the company implemented more sustainable business practices and is setting the example for others to follow.

This isn’t the first time the Swedish Ingka Group– the owner of IKEA–  acquired large amounts of forestland. In fact, they own more than half a million acres of land in the United States and Europe; with properties in Alabama, Oklahoma, South Carolina, Texas, and now Georgia.

The acquisition of the land near the Altamaha River Basin protected the local ecosystem and prevented it from being sectioned off for development. The goal is to be able to preserve and restore the woodland, while receiving essential benefits like the mitigation of climate change, cleaner water sources, and the conservation of wildlife habitats.

Endangered organisms that have a home in this area, such as the longleaf pine and gopher tortoise, have now been safeguarded.

As specified by the U.S. Fish and Wildlife service, before the migration of Europeans to North America, the longleaf pine forest engulfed 90 million acres across the eastern region– spreading from Virginia to Florida. Now, about four percent of those forestlands remain. Their decay can be attributed to the cultivation of the land for both the expansion of cities and their conversion to other types of farms.

By 2030, IKEA wants to be a “climate positive” establishment. This title requires that they reduce their greenhouse gas emissions. They have already begun to accomplish this by shifting to renewable energy sources, better evaluation of their resource procurement, electric delivery vehicles, and the recycling of old furniture for resale.

Sanderson sophomore, Cate Hawting, simplifies the benefits of companies becoming more conscious about their impact on flora and fauna– as well as the Earth as a whole. She affirms, “As we continue to switch to more sustainable options, it will become easier because production and innovations will increase, resulting in better products.”

In addition to their new business models, the reformed company is using it’s forestlands to suck carbon dioxide from the atmosphere. No significant amount of wood from these forests are being used in IKEA products and the company ensures they are being managed sustainably through the concept that the annual growth of trees is greater than the harvested amount of lumber.

SHS sophomore, Dylan Hemedinger illustrates: “Trees are a renewable resource; as long as we don’t go crazy making ‘thneeds’, they’re just going to keep growing.” Hemedinger is making a connection to the Children’s book, The Lorax, published in 1971.

The book and its animated 2012 film convey how human lust for success can lead to a world with little to no natural resources. The movie itself has been utilized in many classrooms to portray this message and leads to the recognition that everyone– even large corporations– have the responsibility of stewardship of the Earth.

AP Environmental Science Teacher, Amanda Herlacher states: “People often think of sustainability as something that is too hard to accomplish or something that doesn’t impact them directly, but everything on our planet is connected, so it impacts everyone.”

Herlacher added, “We need change to happen at all levels, from the big corporations changing to a more sustainable model that treats workers and the environment well, all the way down to the consumer level purchasing decisions to go for reusable products that are quality made.”

Climate change continues to be a global concern and will continue to be a severe issue– even if things begin to change. As a result of a growing human population, rampant deforestation and increased urbanization of land will exponentially escalate.

Forest degradation is responsible for about 10% of all global warming emissions, according to the Union of Concerned Scientists. The UN Environment Program expresses that urban activities and cities are major contributors to greenhouse gas emissions– with an estimation that metropolitan areas are responsible for 75% of CO2 output.

Climate.gov expounds that carbon dioxide in itself is blameworthy for about two thirds of the Earth’s total energy imbalance. This imbalance is attributed to the outpouring of greenhouse gases which trap additional heat in the atmosphere and raise the planet’s average temperature.

IKEA’s alteration in their company’s ethical standards and their efforts to counteract the environmental footprint they leave by partaking in ventures such as the Georgia purchase is truly impressive. The majority of large firms would not make this shift, because of the risk of deterring profits.

Hemedinger elucidates, “Companies need to take responsibility for their environmental impact, and this looks like a step in the right direction.”

Human consumption is also what fuels these businesses to mass produce the way they do. Without the demand there would be no need for the supply.

Hawting asserts, “I think that often, especially in American culture, we tend to buy things mindlessly and not think about whether we really need that item. More mindful, careful consumers can help reduce unnecessary waste.”

This is something that all people should keep in mind when making decisions not only about what they are buying, but from whom they are buying from. Ask yourself, Do I really need this?, Does this fit my lifestyle?, or Was this product ethically made?

It is important that young adults understand that their generation will be making decisions about how to deal with the carelessness of business practices and consumer choices in the future. Taking a few extra steps in one’s day-to-day life, and following principled business practices designed to promote sustainability will have a plethora of positive consequences.