The Week of Chaos: Election Week 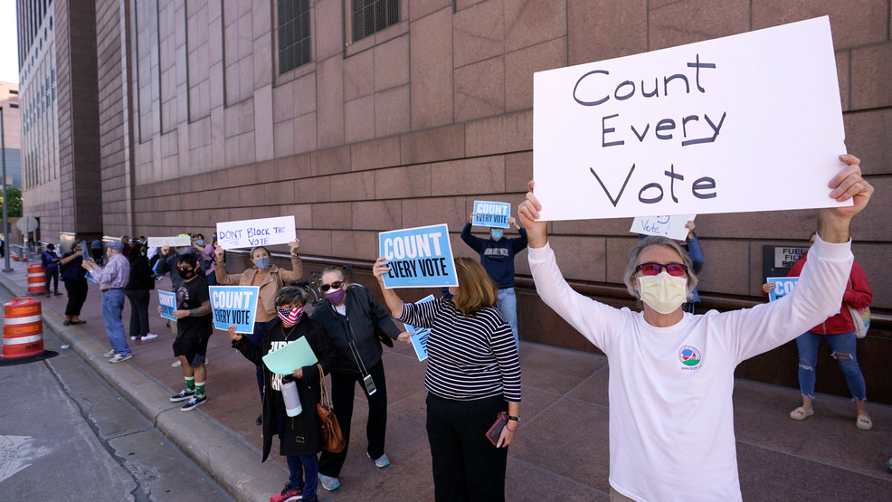 Mail-in-ballots continue to be counted at the polls.

This week is election week; every U.S. citizen is living in anxiety, excitement, or fear for the unleashing of the next President of the United States. The anticipation builds as the counting process of votes is taking longer than usual.

This is because mail-in ballots take longer to count and according to CNBC News, over 150 million Americans are predicted to have voted in this election.

Though the top two party candidates, Former Vice President Joe Biden and President Donald Trump, are in the lead; citizens of the U.S. are on the verge of a civil war. These two candidates are almost completely opposite, creating a country more polarized than ever.

Sanderson senior Cindy Gonzalez says, “This election is intense. We are stuck at a point where if one party doesn’t win, there will be an uproar.” This mindset leaves many Americans anxious for the vote turnout.

While President Trump still has many supporting states, Biden has caused several Republican states to go blue this year. States such as Arizona, are called “swing states.”

Swing states are states that switch between Republican and Democratic parties during the election. Learn more about these States Swinging in The Polls.

Though these states may leave people on edge about which party gets the electoral vote, they are thought of as necessities. Senior Alaysia Peavy focuses on the importance of these states saying, “We would have the same results every election. If states, like California, were to choose the same party every year, we would be stuck with only one party.”

As we know, mail-in ballots take a longer time to count and with the COVID-19 pandemic still ravishing the nation, more citizens than ever have chosen to vote this way.

The 2020 Election Day passed on November 3. A few days later, votes are still being counted.

Biden leads with a total of 264 electoral votes as of Friday night but President Trump has won most of the western and southern states. This election is definitely one to remember.

Freshman Ashley Sosa-Godines shared her thoughts about the election saying, “I will be relieved after this election. As someone that cannot vote, I wish the voters did not disregard the feelings of the younger generation. We are also vocal and political.”

The future of America depends on its citizens. Now, we wait to find out who the American People have chosen as their next President of the United States.