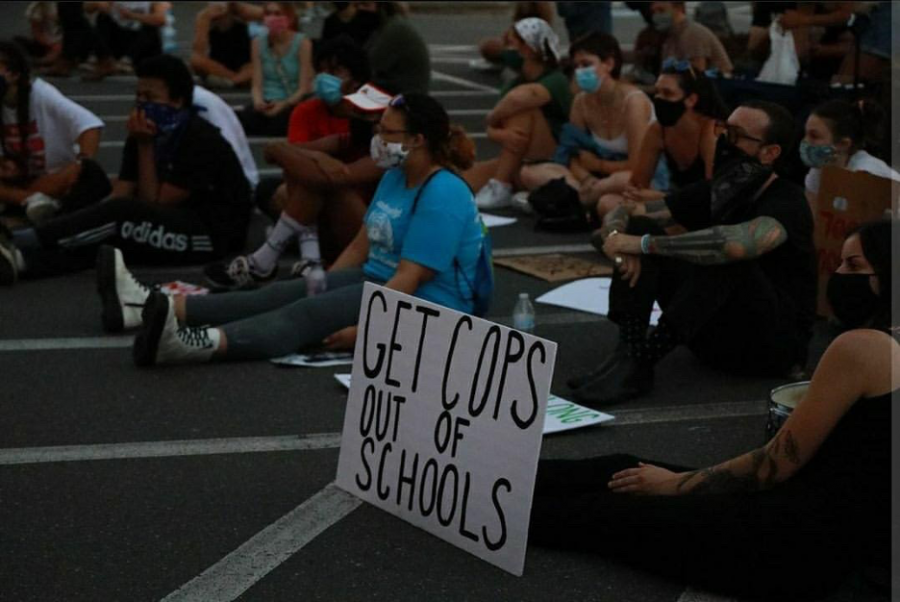 The year 2020 has had many political outbreaks; the Black Lives Matter movement is widely known as one of them. Protesters gathered in large groups across the United States and world-wide. Many of these protests were peaceful, but some took a turn for the worse.

The movement surged in May, 2020, when a man named George Floyd was killed by Derek Chauvin, a Minneapolis police officer. Floyd had a warrant for his arrest for allegedly using a counterfeit $20 bill, which led to his death eight minutes later, on May 25th, 2020.

A day later protesters gathered in Minneapolis to take  action due against police brutality. During the protest, property was destroyed, burned, and shattered.

Ever since, more peaceful and violent protests have continued followed by controversy over the destruction of property.

Sanderson junior, Chalina Morgan-Lopez, attended a few protests in both Raleigh and Cary. At a protest in front of the North Carolina state Capitol, in Raleigh, she described the atmosphere as “energetic and unifying, you could feel the youth of the community coming together.”

Lopez also attended the WCPSS Headquarters protest in Cary, NC, that stood against the reopening of public schools because of how it would affect BIPOC (Black, Indegionous, People of color) students during the Covid-19 pandemic.

The protesters demanded the abolition of SROs, the creation of a safe platform for BIPOC students to speak, staff accountability programs, and the integration of black history into the standard curriculum. These are all factors that can help make black students feel validated, and safe in public schools.

Lopez was asked what she hopes to see in the future for black lives after the protest. She responded, “I hope to see people listening to those who are affected, and working to be actively anti-racist. I hope to see more inclusivity in our educational courses, and a criminal justice system that is designed to help the community. Students should never fear for their safety or freedom, and should be able to express themselves in a place where they’re supposed to be cared for.”

Trenton Brown, one of Sanderson High School’s assistant principals, and the director of the Equity Club, shared how the club has gotten involved saying,“We did a session in May that addressed the issue with staff. The session was called, The Student Voice Against Police Brutality and Inequalities Among Minorities.”

Brown also said, “Black lives matter has recently gained national attention due to unarmed black people being shot by police officers. Although this issue is not new, the death of George Floyd and Breonna Taylor, culminated in a global protest and a cry for justice not just by blacks, but by whites and all ethnicities holding hands like the 1960s. Under the banner of Black Lives Matter, all groups that share injustice, for instance LGBTQ+, see this issue as a time for national and individual reflection on the rights of all humanity.”

The overuse of force exerted by police officers on peaceful protesters led to media coverage that focused more on the violence than the protest itself. One protest in Downtown Raleigh was described as a mix of peace, looting, vandalism, and violence from both the officers and the protesters.

Sanderson senior, Emma Jacobs, did not attend the protests but she shared her experience watching the protests on the news, “I have been following the BLM movement since around 2014. It feels like this year, with the spike in BLM activity, and the spotlight on the police force, the news delivered much more fear-mongering content, framing BLM as violent”

The topic of Black Lives Matter has been very controversial over the past few months. Many citizens have changed their perspective on police officers, demanding the police force to be defunded, reformed, or even abolished.

While not all cops are bad, the movement does point out the issues within the police workforce. It seems that minorities, especially black minorities, are being targeted. This issue has been normalized for so long that black families have been raised to fear the police.

The goal of the movement is to make America safe for all people, regardless of skin color and to end the controversy over Black Lives Matter.